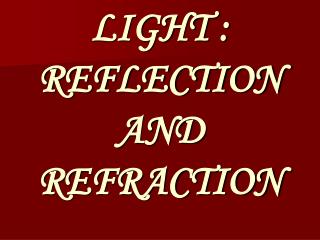 LIGHT : REFLECTION AND REFRACTION. LIGHT. Light is a form of electromagnetic radiation that causes the sensation of sight. It is an indispensable tool without which we cannot explore the colorful beauty of nature. Chapter 35: The Nature of Light and the Principles of Ray Optics - . reading assignment: chapter 35 and selections of

Refraction is bending of light rays - . refraction occurs at a boundary the speed of light must change at the boundary

Nature of Light and Laws of Geometric Optics - . the nature of light reflection refraction index of refraction huygens’

LIGHT - . tlw explore what you see when you mix colors of light. tlw describe visible light as a part of the

Nature of Light and Laws of Geometric Optics - . the nature of light reflection refraction index of refraction huygens’

The Maze of Light - The blind fireflies present…. … an introduction to refraction and reflection of light. the maze

Refraction, Lenses, Color - . the bending of light as it changes speed when entering a different medium is. reflection

Chapter 28 - . reflection and refraction. home. when light falls on the surface of a material, it can be re-emitted

L 30 Light and Optics - 2 - . measurements of the speed of light (c) index of refraction v medium = c/n the bending of

Reflection and Refraction - . every second of every day our eyes detect and interpret rays of light – whether that

Refraction - . fast. light is a wave!!. slow. white light is made up of many different colors of light. each color of

Reflection and Refraction - . (5.6c) demonstrate that light travels in a straight line until it strikes an object or

Quiz Reflection and refraction of Light - . what are luminous object mentioned in the programme ? the sun star planet