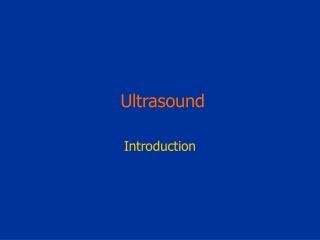 Ultrasound. Introduction. History (Hendee and Ritenour, 2002). In 1880, French physicists Pierre and Jacques Curie discovered the piezoelectric effect. “Piezo” is Greek for pressure. Piezoelectricity refers to the generation of an electrical response to an applied pressure . ULTRASOUND - A deep thermal &amp; non-thermal mechanical modality what is ultrasound? located in the acoustical

ULTRASOUND - Contents. 1. what is ultrasound?2. history3. first recorded use of ultrasound4. different types of

Ultrasound - . determining the nature of a breast abnormality it is a procedure that may be used to determine whether a

ULTRASOUND - . chapter 7. what is ultrasound?. us is a type of sound wave that transmits energy by alternately

ULTRASOUND - . by; nidhi patel period 3 november 22, 2010. what is an ultrasound?. ultrasound- is a procedure that uses

Ultrasound - . michael baram. objectives. basic science terminology examples movies what we should and should not be