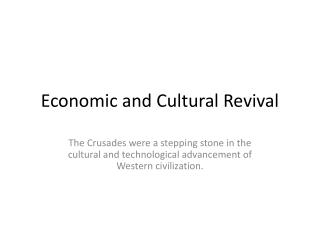 Renaissance Diplomacy and the New Monarchs, 1400-1559 - . trends and developments. background and characteristics. growth

Cultural Strategy for the City Center of Jerusalem as a Platform for its Revival - . diss is culture strategy-

Renaissance and Reformation - . 1. renaissance italy. 1. why did the renaissance begin in italy?. new interest in ancient

The National revival and the liberation - . life is like a big ocean in whose depths there are many hidden reefs. one of

Benefits of regional integration for economic revival Has it been successful? - . namibia economist business forum

Middle Ages - . middle ages- is a time when the roman empire was in decline and new institutions slowly emerged to

Chapter 13 ii Economic and Cultural Revival - . the crusades accelerated the transformation of western europe from crude,

Medieval Life - . to understand life on a manor during the middle ages, the next several slides will be pictures taken

The Renaissance - . the renaissance. why were the italian city-states a favorable setting for a cultural rebirth? what

Europe during the Middle Ages and the Renaissance - . ap world history i. periodization. the middle ages lasted from

Revival of Trade—how did moving to a market economy affect people? - . read over pp. 324-326 in your textbook . on

REUNIFICATION AND RENAISSANCE IN CHINESE CIVILIZATION - . chapter 12 the era of the tang and song dynasties. 220 end of

Renaissance Politics and Economics - . setting the stage for the renaissance: economics. revival of trade: 11th century