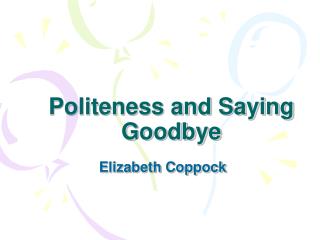 SAYING HELLO AND GOODBYE - . a greeting is a friendly way of opening a conversation there are many ways to say. hello. hi

Saying Goodbye to the PowerPoint - . do you get the irony here?. presented by marnie utz with heavy influence from wendy

Contract Law: Saying Goodbye Effectively - In this article, we’ll look at what can happen if it all goes wrong and what

Politeness - . politeness class five. last class talking about our families using the present tense for events that are:

Politeness and deference - . polite behaviour is the way that we could achieve our goals demonstrating people our good

Politeness - . starter – how might politeness be connected to english language and literature?. learning objective –