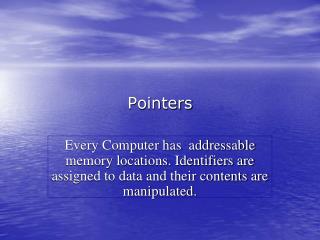 Pointers. Every Computer has addressable memory locations. Identifiers are assigned to data and their contents are manipulated. Example In a C program, we can have. void main() {int a,b; /*variable is assigned a a=3; value & manipulated,

Lecture 7 C Pointers - . acknowledgment the notes are adapted from those provided by deitel &amp; associates, inc.

Working with Pointers - . an exercise in destroying your computer. what is this?. your worst nightmare! comes from

3 – Pointers - . why pointer variable s ?. most difficult part of c the most useful can use them to code call by

POINTERS - . what is meant by pointer is and why it can be used?. how to declare and access a pointer variable. explain

Arrays and Pointers in C - . alan l. cox alc@rice.edu. objectives. be able to use arrays, pointers, and strings in c

Arrays and Pointers - . the relationship between pointers and arrays. arrays and pointers are closely related array name

Arrays, Records and Pointers - . arrays, records and pointers. data structures are classified as either linear or