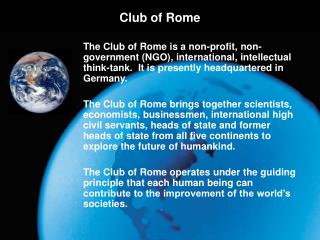 Club of Rome. The Club of Rome is a non-profit, non-government (NGO), international, intellectual think-tank. It is presently headquartered in Germany. Wawrzyniec Konarski Polish Association for the Club of Rome - . energy sources possession as potential tool for policy of

Coping with Success – A Comeback for the Club of Rome? - Tas mckee memorial address to the new zealand minerals

Ancient Rome The Fall of Rome - . roman rap this is the roman empire hannibal running around setting cities on fire.

Rise of Rome - . st. peter’s basilica. christ (sol invictus ). from the excavations in the 1940s. clement of rome.

Scientists of Rome - . by: emily larsson and miranda king. library of alexandria. largest and most significant library of

Fall of Rome - . quiz. this man never met jesus, and actually persecuted christians in his early life. he would later go

Fall of Rome - . fall of roman empire. third century ad, rome faced many problems came from within and from the outside

History of Rome - . by: jaleon montgomery. rome was around for along time, infact r ome is so old that it is known as