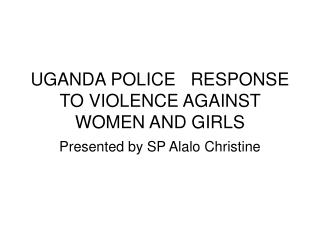 UGANDA POLICE RESPONSE TO VIOLENCE AGAINST WOMEN AND GIRLS UGANDA POLICE RESPONSE TO VIOLENCE AGAINST WOMEN AND GIRLS

Violence Against Women An International Comparative Analysis - . group presentation. violence against women an

BELLWORK - . what is collectivization? how does this relate to the main idea of communism? what is genocide? besides the

GIRL CHILD: NOT CHARITY, BUT JUSTICE - . dr (mrs.) manju subhash. gloom and resignation at the birth of girl jubilation

HERSTORY: - . violence against women and their children. marxist feminism (origins of women’s oppression). by

Violence Against Women - . percentage of women who reported having experienced physical or sexual violence or both at

“When I Call for Help” A Pastoral Response to Domestic Violence Against Women - . a statement of the u.s. catholic