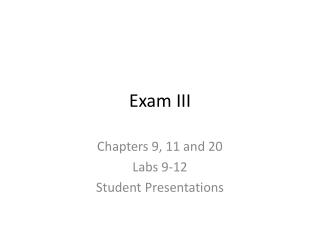 Exam III. Chapters 9, 11 and 20 Labs 9-12 Student Presentations . Chapter 9 Forensic Toxicology 1. What is toxicology?. Toxicology- mix of Chemistry and Physiology that deals with drugs, poisons, and other toxic substances. 2. What activities are considered part of forensic toxicology ?.

3 rd 9 Wks Exam - . terms to know. blank verse. poetry written has a regular meter (rhythm) but does not rhyme (the meter

The EMPA practical Exam - Learning objectives. the empa practical exam. to provide an exam “crib sheet” for the empa

Review session for exam-III - . q1. which of these is able to cross the inner mitochondrial membrane?. fatty acyl-coa

Unit Exam #3 Trashketball - . 1. an animal has radial symmetry, a sac-like body with only one opening and tentacles with