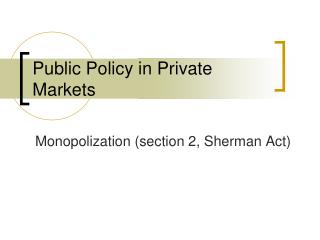 Public Policy in Private Markets. Monopolization (section 2, Sherman Act). Announcements. Case presentations: 1 case has been assigned Case 8, K&W, 5 th edition Debate date: March 6 th . Video due to me: March 2 nd . There will be a homework on that day Clickers:

Chapter 14 Public Sector and Policy - . this lecture will give you. a knowledge of the key organizations globally with an

Policy for market failure - . nearly all environmental policies include two key decisions (both components in practice

Public-Private Partnerships “P3” Transportation Projects - . what is a p3?. an agreement between public and private

Chapter 4: public goods - . public provision of goods. private provision of certain goods (particularly those that are

Public Policy in Private Markets - . introduction. welcome to resec 453. introduction what is this course about? how will