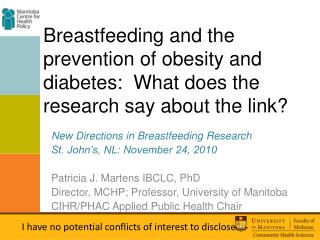 Breastfeeding and the prevention of obesity and diabetes: What does the research say about the link?. New Directions in Breastfeeding Research St. John’s, NL: November 24, 2010 Patricia J. Martens IBCLC, PhD Director, MCHP; Professor, University of Manitoba Protecting Babies: Breastfeeding and Sleeping - . learning objectives. by the end of this presentation, participants will

John Doherty, Ed.D . 2010 Blueprint for Excellence National Conference December 7, 2010 - It all begins at the top how to

Exclusive Breastfeeding (EBF) and Child Mortality in West Africa: An Examination of the Differen - Ce in rates in burkina