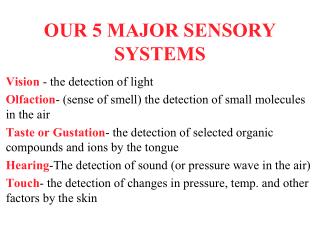 Sensory Reception - . chapter 35. sensory systems. the means by which organisms receive signals from the external world

Sensory systems: Transduction - . sensory cells are either 1. epithelial cells that are induced to specialize in

Sensory Systems - . sensory “receptors”. in order to respond to your environment, or maintain homeostasis, you must

Sensory and Motor Mechanisms - . chapter 49. sensing and acting. bats use sonar to detect their prey moths  c an

Sensory Physiology - . the general purpose of the sensory systems is to convert a specific type of stimulus into

SENSATION - . module 9. sensation: process by which our sensory systems (eyes, ears and other sensory organs) and nervous

4. Visual Sensory Systems - . the stimulus: light the visual stimuli as a wave of electromagnetic energy ( fig 4.1a )

F. Sensory Receptors - . what are sensory receptors? http://www.youtube.com/watch?v=1vlsz_dxfag&amp;feature=related a

Sensory Reception - . chapter 14. sensory systems. the means by which organisms receive signals from the external world