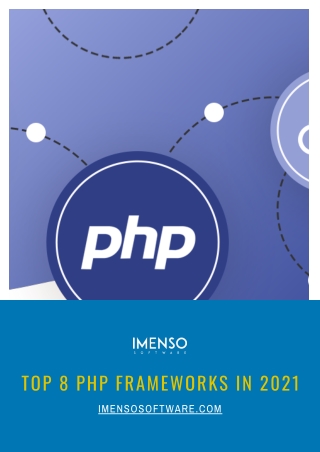 Well, itu2019s not. Even today 79% of all websites use PHP, eight times more, compared to its server-side programming language ASP.NET.u202fu202fu00a0 Top JavaScript Frameworks - Angularjs is an open-source javascript framework, maintained by google, that assists with

PHP Frameworks - . topics. what is the framework? why framework? mvc framework. ben-fits and drawbacks of mvc. php

Top 12 PHP Frameworks 2016 - Php is one of the most popular php frameworks in today's time. here is a list of top 12 php

Comparison of PHP Frameworks - In infographics, we give comparison of four best php frameworks like laravel, codeigniter,

Top 10 PHP frameworks used by PHP developers - Php is a broadly utilized, great programming dialect that enables us to