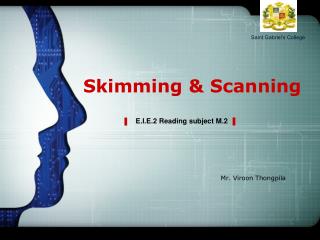 Mr. Viroon Thongpila. E.I.E.2 Reading subject M.2. Skimming & Scanning. Skimming . The technique you use when you're going through a newspaper or magazine: you read quickly to get the main points , and skip over the detail. It's useful to skim: Scanning Electron Microscopy (SEM) - . anders werner bredvei skilbred harald fjeld. outline. what can we use a sem for?

DSC: Differential Scanning Calorimetry A bulk analytical technique - . what does a dsc measure?. a dsc measures the

module 6 - . aims(1). revision of words: new words and the words on the homework paper. listen and guess the words