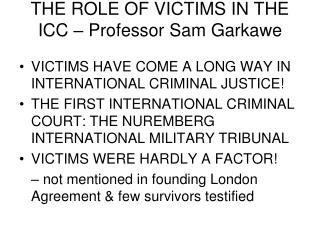 Bloggership: The Role of the Law Professor Blogger - . a. michael froomkin university of miami school of law april 28,

The Kansas ICC - . or, coordinating council on early childhood developmental services. objectives for today. we will

THE VICTIMS - . by sharon olds (from suzanne choo’s unseen poetry and prose , p. 56). attitude of the children in the

Sam the Ant - . by eleanor mcdavid. i am sam and i am an ant. i live in an ant hill. there are lots of us in the hill. we

“ The Cremation of Sam McGee ” - . robert w. service you need notebooks page 637. type of poem: ballad a song or

The evolution of the protection of the rights of victims of terrorism in Spain - . agata serranÒ king juan carlos

Hillside Helps the Victims of Typhoon Yolanda in the Philippines - . 1 can =. 1 tarp +. direct impact. please donate one

The Exploration of Sam the Spider - . by: michael rozelle &amp; laurie

The Role of the…. - The role of the…. basic terms. producers – businesses that make goods and services consumers

The “Rights of the Victims” for assistance - . the right to attend criminal justice proceedings :. a victim’s

Advance Course in the Management of Disaster Victims - . cyprus participation to the european civil protection mechanism

Victims Rights and the Standing of victims in criminal procedures - . focus in judicial cooperation lies traditionally on