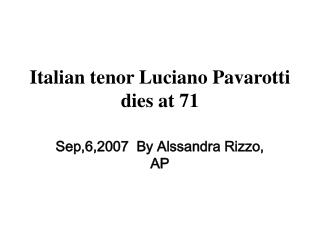 Luciano Pavarotti - . the golden voice bringing opera to the masses. early life. born in north-central italy in 1935 to a

Muhammad Ali dies at 74 - Muhammad ali, who declared “i am the greatest” and proved it many times over, infuriating

John Dies at the End - . david wong. created by destiny templeton. “wong is the most common surname in the world. you

DIES - Purpose: dies are used to cut external threads on round stock. dies are selected by diameter and number of threads

Joel Luciano - . my digital life spring 2012. my computer. i use my home computer for research for school papers. i also