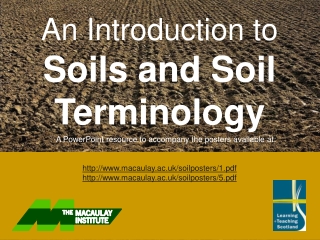 Geomorphology Chapter 3: Soils - . chapter 3: soils “perhaps the most important part of weathering is the development

Soils - . soils. soil is the loose covering of broken rock particles and decaying organic matter soil is the end result

What Is Soil? - . image: t. loynachan. soils-1-1. soil is a layer of unconsolidated material on the earth’s surface in

Soils: - . one of our natural resources!. some call it dirt…..but it is soil !!!. soil is made of loose, weathered rock

Soils, Mass movements, and soil conservation - . from a half-sick mr. lewis. soils. soils are a result of weathering

Lecture #6 – Plant Nutrition and Soils - . image – a soil profile. key concepts:. resources which are required how

Wetland Soils - . definition of soil. a collection of natural bodies, made up of mineral and organic materials, that

Soils Investigation - . why test the soil?. buildings are supported by soil engineering properties of soil are highly