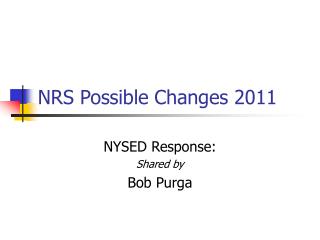 State of Nevada Board of Occupational Therapy - . nrs 640a proposed revisions - bill draft.

Redefining Accountability : The Federal Game is Changing - . understanding the 2012 changes to the national reporting

Welcome to the Washington State Bidders’ Conference - . the audio portion will begin promptly at 9 a.m. if you are