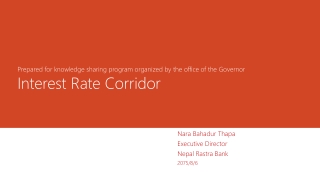 Issues and Challenges of Agriculture vs. Rural Finance in Nepal: Involvement of Nepal Rastra Bank - Paper prepared for

Executive Director of the - Venusval hammack. executive director of the. ngwrc board member 2004-2005. presenting to the

Bam Bahadur Mishra Deputy Director, NRB - To insert your company logo on this slide from the insert menu select

-Dhiraj Thapa - . introduction. adidas is the biggest sportswear manufacturer in europe and one of the biggest in the