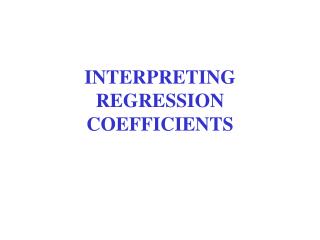 Inference About Regression Coefficients - . bendrix.xls. this is a continuation of the bendrix manufacturing example from

Properties of Least Squares Regression Coefficients - . in addition to the overall fit of the model, we now need to ask

Interpreting regression for non-statisticians - . colin fischbacher. what this presentation will cover. overview of

Coefficients - Is your business partner in simplifying business process execution while ensuring value delivery. we are

Binomial Coefficients - . cs/apma 202 rosen section 4.4 aaron bloomfield. binomial coefficients. it allows us to do a

Dynamic regression with exponentially decreasing coefficients in the transfer function - . consider the dynamic

CORRELATION COEFFICIENTS - . what does a correlation coefficient indicate? what is a scatterplot ? correlation