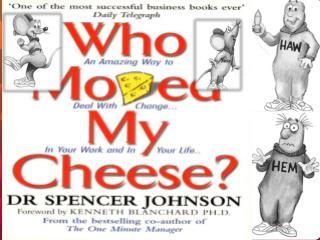 “Who Moved My Cheese?” “Who Moved My Cheese?”. Proverb: a traditional saying, e.g. “People in glass houses should not through stones.” Other examples from Spanish and Chinese are: “De tal palo , tal astillo ” = like father like son

“Who Moved My Cheese?”

Greek island migrants - The island of kos is a landing place for migrants before they are moved to the mainland, piling

Who Moved My Cheese? - . based on a book by spencer johnson, m.d. adapted by tracy l. chenoweth. the story of who moved

Biotechnology (some definitions) - . biotechnology is the development of products using a living organisms to meet a

Chapter 1 - . 1. who is the narrator of the story?. 2. what is the significance of the white space between paragraphs 4

X-Ray Diffraction (XRD) - . principle. in xrd, an incident wave is directed into a material and a detector is typically

KEMAHIRAN ABAD 21 - . we have moved into a more demanding cognitive age, compelling people to become better at absorbing

Who Moved My Cheese by Spencer Johnson - Summary. who moved my cheese is a story about change. it takes place in a maze

When do Organisms need Transport Systems? - . we need transport when 2 cells are far from each other materials needed to

PHP - 23. php. conversion for me was not a damascus road experience. i slowly moved into a intellectual acceptance of

Types of bacteria - Spoilage: not particularly harmful bacteria which cause food to go off beneficial: “good