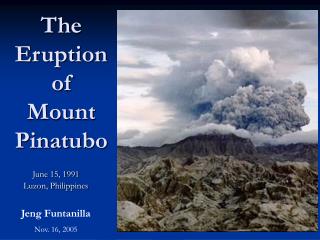 The Eruption of Mount Pinatubo The Eruption of Mount Pinatubo

The eruption In POMPEII - . first sign’s. the first signs of the eruption was an earthquake in ad. 62 but everyone in

Vocabulary - . lesson 12. t he volcano suddenly erupted , so everyone in the village was forced to evacuate. ( verb ) the

Montserrat volcanic eruption - . lo: to produce a case study of the causes, effects (long and short term) and responses

Eruption and Shedding of Teeth - . mixed dentition: presence of both dentitions. figure from ten cate’s oral

The eruption in Eyjafjallajökull and the effect on agriculture in Iceland - . runólfur sigursveinsson advisor the

The Eruption of Mount Pinatubo 1991