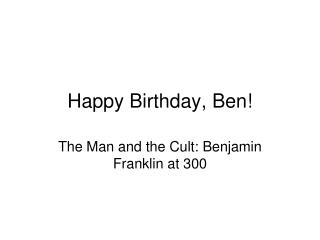 Happy Birthday, Ben!. The Man and the Cult: Benjamin Franklin at 300. His Life. Born in Boston to Josiah Franklin and Abiah Folger, January 6, 1706 (old style) Attends school from 1714-16 1716: he becomes his father’s assistant in his tallow-chandlery Art II Intermediate ARt - . the art of communication. welcome to art you will be happy here!. 1 st day agenda. welcome to

Happy Monday!!! - . take out your vocab so i can come around a check it did you know: there are 216 noodles in a can of

No one is truly free to live until one is free to die. Martin Luther King - The eve of his assassination. now comes the

Couplets - . couplet. couplets are any two lines working as a unit, whether they comprise a single stanza or are part of

Happy Valentines - . it is in the year 269 in the city of rome. and it’s a very bad time for the first christians.