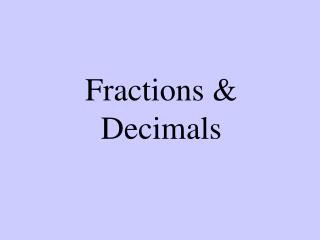 Fractions & Decimals. 3 rd Grade Standards for Fractions and Decimals :. 4.N.3 Demonstrate an understanding of fractions as parts of unit wholes, as parts of a collection, and as locations on the number line. Fractions An Acrostic Poem - . by kaylee moore. f. “f” is for fun fractions. r. “r” is for relative of decimals.

Fractions Workshop Marie Hirst - . have a go at the fraction hunt on your table while you are waiting!. objectives.

Reasonableness with Fractions and Decimals - . for addition. find what whole numbers the first decimal or fraction would

Fractions! - . fractions. a fraction is a number that represents a part of a whole. fractions are useful whenever you