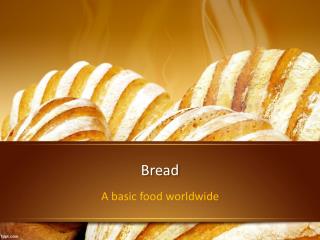 Bread. A basic food worldwide. What is bread?. Bread is a staple food prepared by baking a dough of flour and water. It is popular around the world and is one of the world's oldest foods.

One in Messiah Congregation - . lost tribes or scattered?. what happened on this date?. today is the 5 th day of the 4 th

What’s in your Frig? - . listening &amp; speaking 3a. a plate of spaghetti. a tray of cookies. a tray of fruit. a

Cooking terms - Cont.. bread: to coat with dry bread or cracker crumbsbroil: to cook uncovered under a direct source of