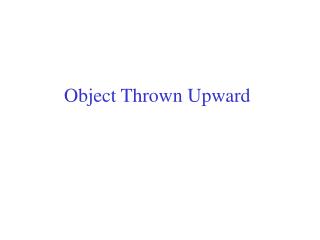 Object Thrown Upward. Explaining Motion. Aristotle again. Natural and Violent Motion. Aristotle asserted that natural motion proceeds from the “nature” of an object, dependent on what combination of the four elements: earth, water, air and fire. The Thrown - . of ketones. who will be crowned?. http://commons.wikimedia.org/wiki/file:acetone-3d-balls.png. ?!prizes!?.

Thrown away food - . which are the food aid associations in your countries?. there are some food aid organizations the

Upward Soccer Coach Training - . what we will cover at this training. primary responsibilities of an upward soccer coach.