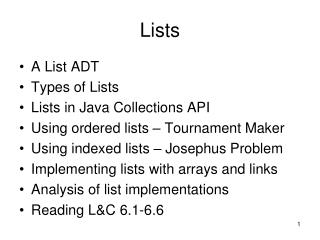 Python LISTS chapter 10 - . from think python how to think like a computer scientist. introduction to lists. a list is a

Skip Lists - . by arlen fletcher and tim heuett. what are skip lists?. developed around 1989 by william pugh as an

Linked Lists - . chapter 3. objectives. you will be able to: describe an abstract data type for lists. understand and use

Linked Lists in Action - . this chapter introduces linked lists. this presentation shows how to implement the most common