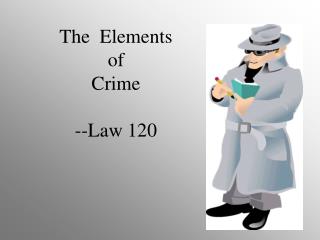 The Elements of Crime --Law 120. What is a crime?. Any act or omission of an act that is prohibited and punishable by federal statute. In general, four conditions must apply:. Act considered wrong by society Act causes harm to society in general or those who need protection

Rules and Regulations for Facilities - . module 1: the child care professional and the law. key

The Criminal code of Canada - . law 120. federal statute that reflects the social values of canadians which is amended

Crimes Against the Person - . agenda march 13, 2013. today’s topics introduction to criminal law state of mind vs.

Jobs and Crime - . week one: tuesday &amp; thursday. summary for lecture two. crime is an economic problem loss of