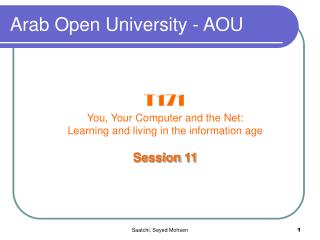 Arab Open University - AOU. T171 You, Your Computer and the Net: Learning and living in the information age Session 11. About Module III. Section 4: Organization to Organization. Book reference: ‘Blown to Bits’, Chapters 9. The main Idea covered in this section are:. open data - . where government and citizens get into intelligent interactions based on equal knowledge. paul suijkerbuijk