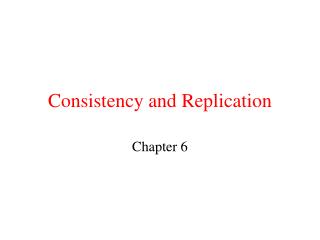 Replication of DNA - . biology standards 5 a and b. phosphate. po 4 makes up a part of the dna/rna backbone. sugar. in

Consistency - . an estimator is a consistent estimator of θ, if , i.e., if converge in probability to θ. . theorem. an

Consistency and Replication - . replication of data. why? to enhance reliability to improve performance in a large scale