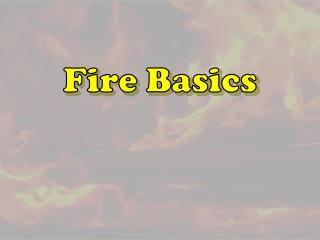 Fire Basics. ARSON. One of the fastest growing crimes in US Arson for its own sake – pyromania Arson to cover up other crimes such as murder or embezzlement Not hard to determine if a fire is arson Difficult to determine who caused the fire

WNY FREE Group - . fire preparation. fire. fire and water are in all probability your first concerns regarding survival

Structure Fire Ventilation - . making firefighting easier. ventilation basics. why should you ventilate? when should you

Using Fire Extinguishers Safely - . overview. different types of fire extinguishers, how to use them safely, in what