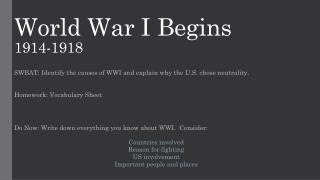 World War I Begins 1914-1918. SWBAT: Identify the causes of WWI and explain why the U.S. chose neutrality. Homework : Vocabulary Sheet Do Now: Write down everything you know about WWI. Consider: Countries involved Reason for fighting US involvement Important people and places.