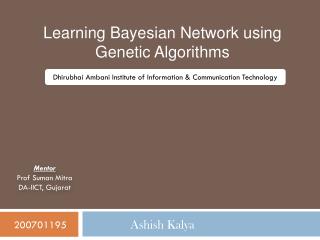 Books on Genetic Programming - . koza, j. r (1992). genetic programming: on the programming of computers by means of

A Tutorial on Learning with Bayesian Networks - . david heckerman. what is a bayesian network?. “a graphical model for

Bayesian Network - . introduction. independence assumptions seems to be necessary for probabilistic inference to be

Application of Genetic Algorithms and Neural Networks to the Solution of Inverse Heat Conduction Problems - . a tutorial