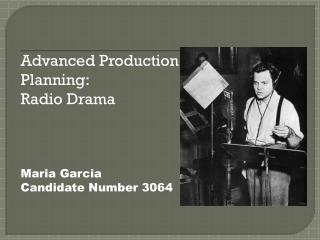 Advanced Production Planning: Radio Drama Maria Garcia Candidate Number 3064. Drafting and Redrafting. I completed at least 4 full drafts of the script for the excerpt of the radio drama I would be producing. The main alterations and changes of the script that I made were:

Tuesday Siesta Gabriel Garcia Marquez - . gabriel garcia marquez grew up in colombia in a small village just off the

Craft Lesson: Structure and Elements of Drama - . history of drama… . drama was developed more than 2,500 years ago.