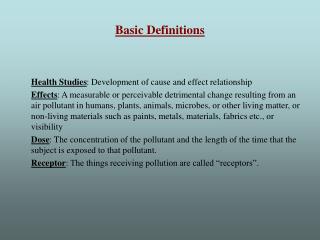 Basic Definitions. Health Studies : Development of cause and effect relationship

SENIORS… Why are there so many different opinions and definitions of God? - What process do most people use to decide

Definitions - . bacteremia: presence of bacteria in the blood under normal circumstances, the blood is a sterile