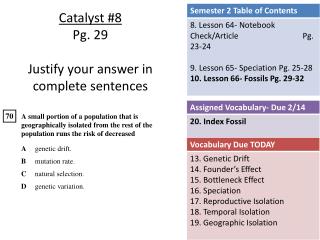 Seductions of Crime Jack Katz - . ch. 1 righteous slaughter people murder to defend what they believe is “good” in

Combining Sentences - One plus one equals one. combining sentences sentence combining is making one smoother, more

Comma Splices, Fragments, and Run-on Sentences - . 232 najd. starting a sentence with ‘because’. you can start a

Chem Catalyst: - Chem hw: none. chem catalyst:. to be eligible for grants (free money for college), you need a 3.2 gpa,

Warm Up Sentences - . quarter 1 and 2. bell-ringers: sentence fix ups. read the sentence---write a correction in your

Who Will Survive? - . copy the chart below into your spiral. describe (in complete sentences) the environment of the

Alka Seltzer and density - . density of gas. lab. chem catalyst. you have seen the commercials, maybe used the product

The Necklace - Guy de maupassant. the necklace. student created notebook for “the necklace”. you will create a

The Sentence and Its Parts - . mr. bush chapter 1. complete subjects and predicates. here’s the idea in order to share