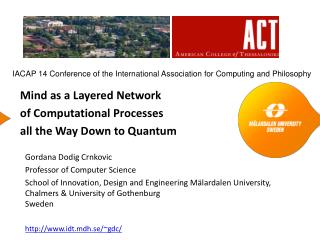 IACAP 14 Conference of the International Association for Computing and Philosophy. Mind as a Layered Network of Computational Processes all the Way Down to Quantum. Gordana Dodig Crnkovic Professor of Computer Science Interactions all the way down a - . friedrich &amp; assadollahi. problem of information. calow, 1976: the human body

Cubes All The Way Down - . fez technical post-mortem by renaud bédard , programmer ( polytron ). about me. started

A Prosperous Way Down - 0. a prosperous way down. principles and policies. 0. presentation by betty odum gainesville,

A long way down… - . how would you describe a high diver? as someone who is:. brave. insane. full of beans. full of

A long way down… - . how would you describe a bungee jumper? as someone who is:. brave. insane. full of gravitational

The Middle Mind By Curtis White (Ignorance as a Way of Life) - . presentation by tracie davis schwertley. have you seen

The Middle Mind By Curtis White Ignorance as a Way of Life - Have you seen the middle mind"?. it appears on the

Emotion as a Layered Control System - . nancy alvarado. what does emotion do for humans?. it is part of what it means to

Quantum Conception of the Mind-Brain Connection - . two different aspects of our understanding of nature: mental ~