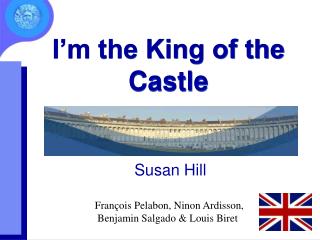 Abraham Father Of Faith 3 - The evil empire. genesis 141 and it came to pass in the days of amraphel king of shinar,

The Once and Future King - . book 1 chapters 5-8 by: kristen koch, erica howell and stephanie rondeau. chapter 5. the

Open the drawbridge for… - . castles!. by: rodney miller. a lesson meant for a king!. what is a “castle” castle vs.

Castle in Västerås - . made by hanna stendahl and madelene hellström. tidö c astle . tidö castle is not just a

King Tut’s Tomb - . the mystery of a king’s curse. by tyler. history of king tut. king tutankhamen (tut) was an

Introduction to Hamlet - . setting. middle ages denmark elsinore castle. in media res - “in the middle of the

Which king lived in Wawel? a) John III Sobieski b) King Sigmund III Vasa c) Boleslaw the Brave - Where is elbląg canal?

Next g - But after the glory era of the late 1800’s and surviving two world wars, life at the château became rather

KING ANCESTOR RELATED VENUES IN POLAND - . castle of the dukes of glogow boleslaw i the brave (34 th ggf of a e king sr )

WELCOME TO VÄXJÖ! - . 1200. växjö became an episcopal see, a city of learning and a centre of commerce and culture.

Roscommon Castle - . the history of the castle. once upon a time there was an english king, edward i who built a castle