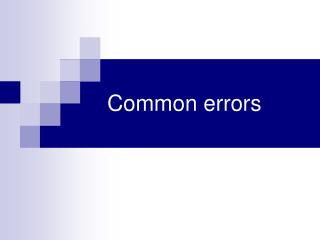 The Bible: Are There Errors? - . â€œthe bible is a product of man, my dear. not of godâ€¦. man created it as a

Modeling of Uncertainty in Computational Mechanics - . andrzej pownuk, the university of texas at el paso

Nursing Errors - . by: kristy clark and dawn simon. what is a nursing error?. a mistake that is made by a nurse that: can