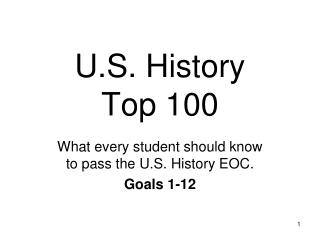 U.S. History Top 100. What every student should know to pass the U.S. History EOC. Goals 1-12. Goal 1: The New Nation (1789-1820). The learner will identify, investigate, and assess the effectiveness of the institutions of the emerging republic. Who could vote?

Studying the History of New Hampshire - . topic suggestions arranged by focus and by era in a quick reference chart.