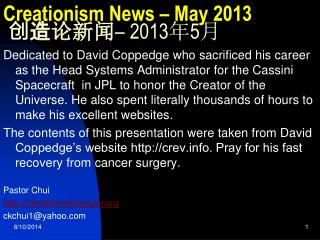 Creationism News – May 2013 创造 论新闻 – 2013 年 5 月. Dedicated to David Coppedge who sacrificed his career as the Head Systems Administrator for the Cassini Spacecraft in JPL to honor the Creator of the Universe. He also spent literally thousands of hours to make his excellent websites. Evolution vs Creationism An Introduction Second Edition - . eugenie c scott. what do you know about the

Creationism - . ?. cre·a·tion·ism [kree-ey-shuh-niz-uhm] –noun. creationism is the belief that humanity, life, the

September 2013 Updates: Hahgoot’s school news - The school has a new summer dress, which is actually a retro design