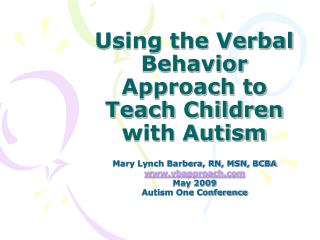 Using the Verbal Behavior Approach to Teach Children with Autism Using the Verbal Behavior Approach to Teach Children with Autism. Mary Lynch Barbera, RN, MSN, BCBA www.vbapproach.com May 2009 Autism One Conference. My Autism Journey. July 2, 1999 – Lucas was diagnosed with moderate to severe autism one day before his third birthday.

Using the Verbal Behavior Approach to Teach Children with Autism

BECAUSE - Know yourself. because. improvement. begins with…. i. forming of perception language vs. communication non -

Identification and Progress Monitoring at Tier 3: Prevent-Teach-Reinforce - . presented at 2008 national forum for

4.7 FORMING FUNCTIONS FROM VERBAL DESCRIPTIONS - . objectives: 1) form a function in one variable from a verbal

Understanding Autism in the Context of Screening: Where Do We Go From Here ? - . ann m. mastergeorge cihs/first5 special