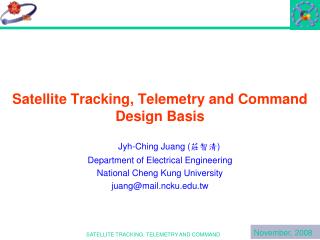 Search And Rescue Satellite Aided Tracking System - . how much is your life worth? consider getting a 406 mhz elt for

Telemetry - . what is telemetry? telemetry is the process by which an object’s characteristics are measured (such as

SATELLITE LINK DESIGN - . by s.sadhish prabhu. introduction . cost to build and launch a geo satellite is about 25,000

Satellite Link Design - . content . design of the satellite links link budget and their interpretation. introduction. a