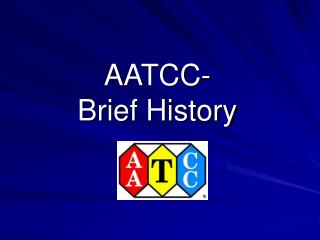 AATCC- Brief History. Brief History. Founded at a meeting of 140 men on November 3, 1921, at the Engineer’s Club in Boston, Massachusetts Local Sections of AATCC began forming immediately after AATCC was formed. BRIEF HISTORY - . the government through different agencies (nia in particular) tried to woo the bugkalot tribe to win

A brief history … - A history of the cacg, eugridpma, and the igtf (and some next steps) first apgridpma face-to-face

A Brief History - . in 1933, nrcs (then the soil erosion service), started working with farmers to reduce erosion and