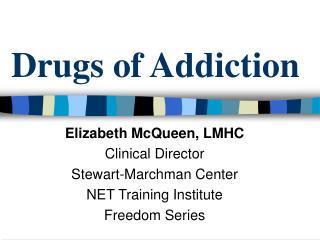 BIOLOGY OF ADDICTION: - . what neuroscience has to tell us about addiction as a brain disorder. daniel p logan, m.d.,

Addiction - In belgium. addiction. hanne benoit &amp; reinhilde hagymási. when do you think someone is addicted ?. c

Addiction - . heroin. according to the specification you need to be able to :. describe, with reference to heroin and

Addiction - . substance abuse grade 10 phe is addiction a moral defect, a mental illness or a party gone wrong?. what do

Addiction - . what is addiction?. addiction: is an activity or substance people repeatedly crave to experience and for

Addiction - . nicotine . according to the specification you need to be able to :. describe, with reference to heroin and

Drugs and Addiction - . neuropsychiatry lecture 11.21.12 jeannine foley. which of the following treatments for opioid

Alchemy of Addiction - . a fresh look at dual-diagnosis. the flame of

ADDICTION - . what is and what isn’t. leo lanoie, md, asam cert. addiction is not:. tolerance physiological dependence