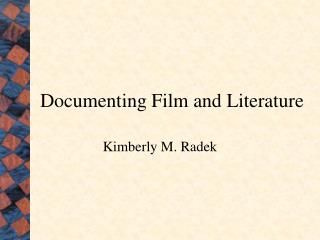 Documenting Film and Literature. Kimberly M. Radek. Internal Citations: Quoting from Film. When quoting from films in your paper Mention the film’s director (conventional author) in sentence OR include film’s title in parentheses Film distribution - . by jack morton. a film distributor is essentially the marketer for a film, which are hired to