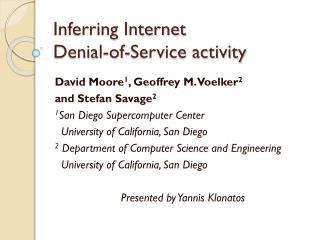 Honeypots - . rohan rajeevan srikanth vanama rakesh akkera. “the more you know about the enemy, the

Inferring - Reading strategy. inferring. your personal background knowledge what you already know helps you to:

Inferring - Deanne a. bafford. inferring. reading component project. not just guessing. quotes about inferring to get

USENIX SEC2000 - . distributed denial of service is there really a threat? david dittrich university of washington

Inferring - . learning goal. you will understand what an inference is and how to use text evidence and background

Denial of Service - . denial of service attacks. unlike other forms of computer attacks, goal isn’t access or theft of