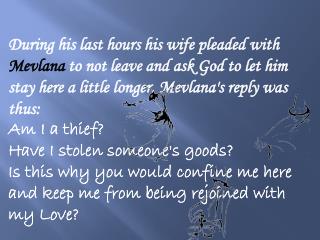 During his last hours his wife pleaded with Mevlana to not leave and ask God to let him stay here a little longer. Mevlana's reply was thus: Am I a thief? Have I stolen someone's goods? Is this why you would confine me here and keep me from being rejoined with my Love?. Come, come again whoever whatever you may be, come - Come, even if you have broken your vows a hundred times, ours is

Come, Savior, Come - . o’er all the land have the signs now appeared, telling us soon our dear savior will come;

“Come as you are” - . some sociologists are now speaking in terms of the present being the “post-christian age.”

Come - . on. down!. you are the next contestant on. flvs. gaming. learn. to. hosted by: holly ard and monica desuyo. our

come - . will you come to the party?. what. what flavor do you want?. one. the boy has one kite. for. we will buy food