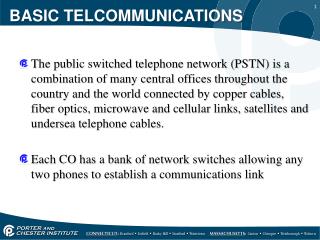 BASIC TELCOMMUNICATIONS . The public switched telephone network (PSTN) is a combination of many central offices throughout the country and the world connected by copper cables, fiber optics, microwave and cellular links, satellites and undersea telephone cables. BASIC TELCOMMUNICATIONS - . the first patent for a telegraph was issued in 1840 voice technology started with the

BASIC TELCOMMUNICATIONS 66 BLK - . 66 blocks are prevalent in the telecommunications industry today they are used

Basic - . paye calculations. steps in calculating p.a.y.e. calculate the gross pay for the pay period . refer to the

Basic - . lighting. theory. what’s this?. nope. it’s called a lamp. and the thing it goes in is called a lighting

Basic Filters: Basic Concepts - . filtering is an important computation process in geophysics that can be divided in two

Basic - Page layout. content. basic. not the most basic but quite common and useful:. basic. sample 1: main page. sample

Basic Seamanship - Basic Shipboard Knowledge - . how to board a military ship. ensign. 1. walk half way up the gangplank,