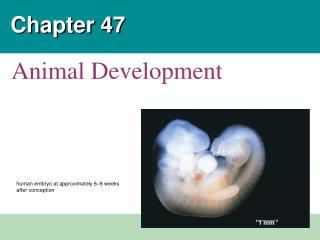 1 mm. Chapter 47. Animal Development. human embryo at approximately 6–8 weeks after conception. Development. An organism’s development Is determined by the genome of the zygote and by differences that arise between early embryonic cells Cell differentiation

Part 7: Chapter 47 An introduction to the analysis and interpretation of accounting statement - . by: nenae 11gs. what

Chapter 47: Animal Development - . 1 mm. figure 47.1 a human embryo about six to eight weeks after conception. 1. the

Chapter 47 - . animal development. an organism’s development is determined by the genome of the zygote and by

Chapter 47 Care of the Patient with a Blood or Lymphatic Disorder -Overview of - Anatomy and physiology. overview of

Chapter 47 - . animal development. 1 mm. figure 47.1. a body-building plan for animals. each of us began life as a single