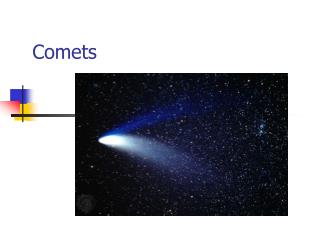 Comets. A comet is a small, icy celestial body that orbits around the Sun. Made up of a nucleus (solid, frozen ice, gas and dust), A gaseous coma (water vapor, CO 2 , and other gases) And a long tail (made of dust and ionized gases). Comet’s Tail.

COMETS!!!!! - . by caitlin, tegan and humaira x x x listen and learn from the masters!. comets – overview a comet is an

Comets - . the oort cloud is a “cloud” of icy planetismals that extends from neptune’s orbit to 150,000 au to the

COMETS - By: myranda shifflett. comets. photo: 2012comets. (roughly the size of a small town). what there made of.

Comets - . by: juan alvarado and cameron murry. rotation and revolution of halley’s comet. in 1705 edmond halley

Comets - . death by photoshop. from archives.org. comets’ appearance. dirty snowballs do not streak across the sky!

Comets - . 25 october 2013. introduction. the history of comet watching dates back to 1000 bc from the chinese records

Comets - . the kuiper belt. many plutoids and smaller icy planetismals or “cometary bodies” orbit close to the same

Comets - . comets are described as “dirty snowballs”. they are a fragile conglomeration of frozen ices and dust

Comets - . the last type of minor solar system object is the one which has been most noticed since deep antiquity…

Comets - . 2 november 2012. introduction. the history of comet watching dates back to 1000 bc from the chinese records

Comets - . by haley neihart physics 1040. what is a comet?. a comet is the leftover material from the formation of stars

Comets - . 30 october 2015. introduction. the history of comet watching dates back to 1000 bc from the chinese records

Asteroids and comets - . by trevor todd and michael tran. what are asteroids made of?. an asteroid is a rocky object up